UAE will have about 109 new hotels that would add 31,000 rooms to the total stock, according to the latest STR Global data available through November. 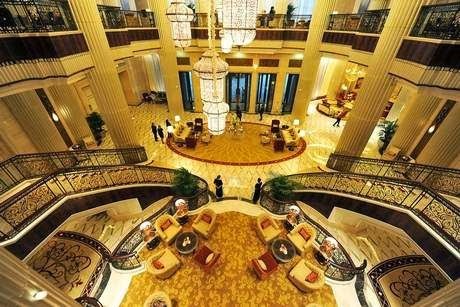 Almost half of the new hotels are planned for Dubai, accounting for more than 16,600 rooms. Abu Dhabi is expected to attract 27 openings with more than 7,000 rooms.

The hotels are confident of increased revenue despite the newcomers.

“The rates have stabilised in the UAE market in general and there might be a slight increase in the leisure business moving forward,” said Omer Kaddouri, the executive vice president and chief operating officer of Rotana.

“We are talking about 10 per cent as an average [increase in room rate] and this is due to the very high demand in both markets, specifically in Dubai.”

The Abu Dhabi-based hotel operator, which manages 32 properties across the country, expects to reach an average occupancy of 82 per cent, with an average room rate of Dh800, across the Emirates for the next year.

“The demand is increasing but we will focus our resources on increasing our market share rather than increasing the room rate,” Mr Kaddouri said.

In Abu Dhabi, the revenue per available room rose 10.4 per cent to US$171.70 last month, compared with the same period last year, according to STR Global.

While this month’s rates are not yet available, the rates at the end of the year in Abu Dhabi have gone down for the past couple of years. Last year, room rates for December were $130.60, a fall from $153.20, according to the Dubai-based HotStats Mena as more hotels were completed.

A rate recovery is unlikely next year, said Rashid Aboobacker, the senior consultant at TRI Mideast in Dubai. “In Abu Dhabi, although hotel room rates have continued to fall this year, the rate of decline has certainly slowed significantly,” Mr Aboobacker said. “The average room rate fell 5.8 per cent during the 11 months compared to 12.5 per cent drop during the same period last year.”

Expansion of routes by Etihad Airways, strong economic growth and a rise in visitors opting for packages, including Abu Dhabi, will be the main drivers for the hospitality industry in the capital, he said.

UAE hotels are also banking on corporate and tourism events besides Arabian Gulf and Russian school holidays to fill their rooms.

“We expect to see an increase in room rates between 10 and 12 per cent and occupancy rates between 5 and 10 per cent between this year and next,” said Arun Kumar, the resident manager at Dubai’s Al Bustan Centre and Residence.

Currently, the rates at the property start at Dh1,000, and are expected to hold through the Chinese and Iranian new years, and the school holidays before falling to Dh550 for the slowest months around June, he said.

“The overall tourist arrivals and corporate build-up are the main drivers and that will remain the trend,” he added.

The hotel, which has 640 suites, has an occupancy rate of 65 per cent on average year round with almost 70 per cent of the tourists coming from the leisure sector.

The corporate sector comprises the rest. At Arabian Courtyard Hotel & Spa, the average room rates are expected to be around Dh550, which represents an 8 per cent increase, and a four per cent rise in occupancy rate for the next year, said Habib Khan, the hotel’s general manager and chief executive of the hospitality division of Planet Group , which operates the hotel. The hotel had 88 per cent occupancy this year.

“There are a lot of positive indicators such as increase in real estate prices and influx of new residents in the country,” he said.

In Dubai, the hotel room rates grew 7.2 per cent in the first 11 months and occupancy levels stayed at 81.4, Mr Aboobacker said.

“We believe the trend will continue next year, supported by a stronger real estate and construction sector, and the gradual improvement in the economic situations in the main tourism feeder markets such as Europe.”

On average, the room rates in Dubai last year hovered around $272, up from $205.50 in the previous year with occupancy of about 80 per cent.

Posted by Jamal Panhwar at 8:19 AM